In the early 1900s, Muskegon-area Polish Catholics belonged to either St. Mary (Irish) or St. Joseph (German) parish. However, many Polish Catholics desired a parish of their own, so the Right Reverend Monsignor Casimer Skory of St. Adalbert Parish in Grand Rapids offered his assistance to help these Polish families establish a place of worship that they could call home.

Masses for the Polish community were first held at Saint Mary and later were moved to Saint Jean de Baptiste. It was there that Father Francis Piaskowski united the fragmented Polish community, and counseled them until their own parish was established under its first pastor, Father Andrew Narloch in 1909.

The name of the proposed parish was chosen by the Most Reverend Bishop Richter on July 31, 1909. The actual date that the “Declaration of Erection” was signed is unknown. However, Father Narloch immediately proceeded to purchase land for the proposed church in January of 1910. Ground breaking for the new church was in February of 1910, and the first combination Saint Michael the Archangel Church and School was constructed in 1911 to serve not only the Polish, but the Slovak, Lithuanian, Ukrainian and Czech families of Muskegon.

The school opened in 1913 with two classrooms on the first floor of the Church building, and was staffed by the Sisters of Mercy. Because there was no Convent at this time, the Sisters lived at Mercy Hospital and walked to and from school daily. In 1914, a third classroom was opened, and a year later, the Sisters moved into the basement of the Church building. The school continued to grow , and by 1918, offered 7 classrooms of up to 60 students in each room. In that same year, the parish decided to build the Sisters of Mercy their own convent. 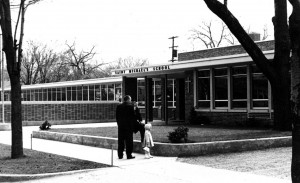 In 1925,  a temporary, portable school structure consisting of 6 classrooms was built to accommodate enrollment. Classrooms had spread to 3 in the basement of the Church / School, 4 classrooms on the first floor plus classes in Kosciuszko Hall. Enrollment reached its peak in 1928 – 1929 with 470 pupils attending St Michael’s School.

In the years following 1925, the parish found itself struggling from debt, the stock market crash and the resulting depression. However, through hard work, perseverance and prayer, the Most Reverend Joseph C. Plagens granted permission in 1941 for the erection of a new Church. The blessing of the ground and groundbreaking ceremony for the new Saint Michael the Archangel took place on Feb. 15, 1942, and construction was completed in 1943. The building was consecrated on May 31, 1944.

The forty-year building spree had ended, and it wasn’t until 1959 that the existing Saint Michael School was built. The building includes seven classrooms, a library, a gymnasium, and a full kitchen. In 1967, The $500,000 debt was finally paid off and a Victory Banquet was held on April 30, to celebrate the payment of the debt and the burning of the Mortgage. Saint Michael Parish operated the school until it was given to the Greater Muskegon Catholic School System as part of the consolidation of schools in Muskegon. It was closed due to declining enrollment, and proprietorship returned to the parish in 2006.

In anticipation of the 75th Anniversary of Saint Michael the Archangel Church, 1982 saw the placement of the Historical Bell, erected between the church and the convent to commemorate the living and deceased members of Saint Michael parish. On it is inscribed the names of all of the Pastors of Saint Michael up until its installation in 1982. In the same spirit, two years later, on October 28, 1984, a new Rogers Organ was dedicated in the Church, a birthday gift to the parish.

When the school was turned over to the Greater Muskegon Catholic system, Saint Michael lost some access to its meeting spaces. So, the Convent was remodeled in 1985 and became the new meeting hall for the parishioners.

After a long debate, on October 31, 1999, Father Thomas Hack succeeded in the opening of Saint Michael Divine Mercy Chapel. Muskegon had its first perpetual Adoration Chapel. This Chapel was renovated in 2000 to accommodate more adorers. As of October 31, 2010 there will have been more than 95,508 hours spent in silent adoration of our Lord in this facility. It is, of course, closed during the Tridium, but the faithful are welcome to visit our Lord at any other time. The answers to many prayers have been attributed to time spent in front of the Blessed Sacrament. It is impossible to determine the blessings received for our families, church and country due to time spent with our Lord. He waits for us to answer His question, “Can you not spend an hour with me?”